I owe it to my friends M. and M.,  discovering national parks and dessert landscapes, that is. I wasn't always driving through white sands in New Mexico, watching sunsets coloring buttes in Arizona, or hiking trough canyons in Utah. For the first few years on this continent my travels were limited to the East Coast and its cities, with the notable exception of a short trip to Niagara Falls. I found both New York City and Washington D.C. unique, one with its organic grow and mix of ... well... everything, the other with its carefully planned constructions meant to impress,  but none of them were my American Venice (that place of wonder and enthusiasm for something new, and beautiful in a way where it felt like you've just discovered the world).

It was a trip to Los Angeles that changed it all. I was visiting my friends M. and M., first time ever on the West Coast. When they asked me what I wanted to see, because cities it's what I knew, cities and touristic site seeings are what I requested. (I know, I should have known better, but this was almost one lifetime ago, when everything I knew about California came from movies and TV shows, information availability on the Internet was not what it is today). So we did all that, Santa Monica, Beverly Hills, Malibu, the cliche photo with the Hollywood sign, photo on the Avenue of Stars, photos with the stars of the favorite stars (on the Avenue of Stars 😁), photo with dipping my feet into the Pacific Ocean. They suggested we add one more item to the list. It was a toss up between Joshua Tree and Death Valley since there was not enough time for both, Joshua Tree won, and that's how it became the first national park I ever saw. (No worries, I saw Death Valley during my next trip.)

Prior to Joshua Tree I have never seen desert landscape. I grew up with green mountains and my definition of escape was hiking leafy valleys scratched by little creeks.  On the drive to the park, I saw a Joshua Tree by the side of road. It looked exactly like the one from the  cover of the U2 album with the same name which I used to listen to endlessly on a cassette player my parents still have. Nothing prepared me for what I was about to experience. So this is what I remember in a flash back, first we went to Mars, sorry, I meant Keys View, but for what I cared we were definitely on another planet;  then it was a Hidden Valley hike surrounded by Joshua Trees, and we were running like kids from one tree to the other to take pictures,  I thought all trees looked funny; there were  earth colored stones with beautiful shapes that seem almost man-made like the one they called the Skull; and the best part,  never-ending fields of glowing cactuses and blue sky  filtered by Ocotillo green stems and red flowers.  Because it was very cold, we were wearing all the layers we could, shorts over long pants, bigger sweatshirt over smaller sweatshirt, hiding our hands in the long sleeves.  This was a play day and Joshua Tree was our playground. 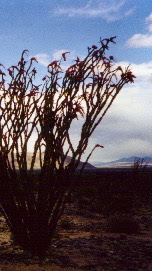 I also learned more about deserts. There are actually two deserts that meet in Joshua Tree.   The first is Mojave, which is the place where Joshua trees grow.  The other is Colorado and cactuses and Ocotillo are prevalent there. I know that Joshua trees were supposed to be the stars, but I got drawn to the Ocotillos. They were both fragile and strong, with thin stems and delicate flowers, but standing tall up to 6-7 meters. An entire field full of them, all in bloom, is one of the most beautiful images I have ever seen. (They make the list.)

That trip could not have come at a better time. Research is by nature an isolating experience. Anxiety and depression were very common among graduate students (not than anybody talked about it), and, if you were an international student, you were  away from family and close friends, a support network that you could not replace overnight.  One had to learn fast how to recharge and be resilient to failure in order to first stay sane and then thrive in an environment  that was as exciting as it was demanding.

I remember my friends telling me that Joshua Tree is one of the best places to watch the sky at night.  I did not get to see the stars from there, instead I discovered something more magical that day. To be connected with nature is to never feel alone.