``It looks like Las Vegas'', a friend of mine once told me. It was  a casual conversation, there was food, there was wine, names of places to travel to were thrown at random, and I happen to mention Macau. Why did I say that? Maybe because I thought it would sound interesting, unattainable almost,  who knows ...  Many years after, I went there on a very, very hot Saturday, and the Macau I saw looked nothing like Las Vegas.

There were of course shiny casinos and luxurious hotels, with futuristic designs and perfect landscaping, aligned along  roads wide enough for  big buses bringing tourists to enjoy the numerous entertainment menus. But that was just a disguise. If you tore through the curtain of glass and skyscrapers, a different Macau revealed itself, raw, colorful, and uniquely beautiful in the way it mixed its Chinese roots with Portuguese influences.

From the moment I stepped on the Macau ferry in Hong Kong, everything I saw written, including the paper forms to enter Macau, was in only two languages, Chinese and Portuguese. I spoke neither of them which added another dimension to the entire adventure -- let's say there was a lot of nodding, eyebrows raising, and talking with my hands, continually getting surprised, in a good kind of way.

One of the most well known historical sites in Macau are the ruins of a Catholic complex that consisted of a college and a church, dedicated to Saint Paul, known as Ruins of Saint Paul. The ruins are a UNESCO World Heritage site, and date to the seventeenth century. Lying at the top of large staircase, the building is a  far cry from the sumptuous churches and palaces spread out through Europe.  Only the front wall is left and from the far distance, it appears as if nothing supports it.  Through the empty windows the blue sky is bursting. It is both broken and perfect at the same time. On one of its sides, smaller, simpler, but no less impressing, is the  Na Tcha Chinese temple.  A short trip next to the ruins, at the top of a hill, you can see some of the best views of the city. It is also the place where Fortaleza do Monte lies, a fort built during the same period as Saint Paul's.

The most beautiful part of Macau is the Senado Square, framed by European-looking yellow buildings with green shutter and iron balconies,  sprinkled with red store signs written in Chinese.  Luxury stores, portuguese bakeries, motorcycles aligned like I saw in Italian cities, umbrellas to hide from the heat,  little details from places I visited before, blended into a space I knew I would never forget. 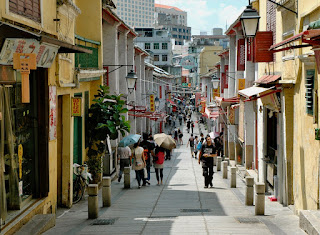 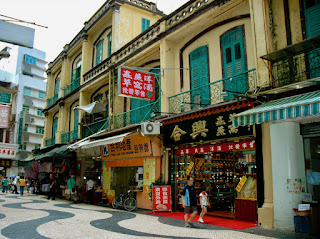 Last, but not least, one needs to mention the iconic pink Governor Palace with white shutters symmetrically placed all over the building and two palm trees guarding the entrance. I spent about a day in this land I knew nobody and I did not speak the language, a few unexpected perfect hours that eased my anxiety about the world. 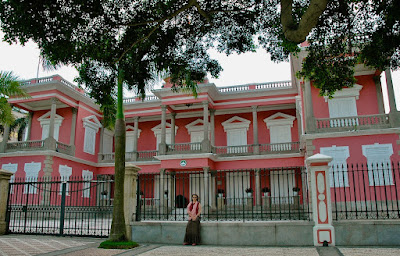 Parts of this were written in July, 2011