From the windows of the apartment I grew up in, during the summer, you could see across the street, gold fields of wheat sprinkled with red poppy flowers and blue cornflowers.  The fields were both a contradiction with the modernity of the city life - my family and I lived in a brand new apartment building and a few bus stops from beautiful parks, museums, theatre, opera and a symphony hall -  and a reminder that, for all the urbanization I was surrounded by, I was the first generation in my family to be born in the city, and many of my relatives, my grandparents included, still lived in the country.

No place captures best this mixture of urban and rural than "Dimitrie Gusti  Village Museum".  Located in the middle of Bucharest,  on the shore of Herastrau Lake, the museum is a blueprint of romanian traditions displayed through the households and churches that were uprooted and brought here from villages all over the country. The outdoor museum was established in 1936 and besides being open to the public it is also used as background for exhibitions and concerts. Some of the most beloved buildings are three wooden churches from different representative parts of Romania, Dragomiresti, Maramures County (1722),  Timișeni, Gorj County (1773), and Răpciuni, Neamț County (1773). (Note: The wooden churches from Maramures and the churches from Northern Moldavia are placed on the UNESCO World Heritage list.) 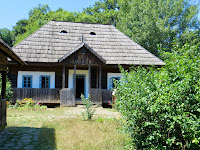 My favorite place in the museum is a house made from straw and dirt bricks, covered with lime, with gray blue window frames, an open wooden veranda, and red geranium in the windows.  It is not the most beautiful house in the museum, in fact there is nothing special about it, other than it looks like the house my grandparents built for themselves and lived their entire life, the house where my mom was born.

Bucharest was not always the capital of Romania. The first attempt to move the Court from Targoviste (the previous capital) to Bucharest, was by none other than Vlad Dracula (known as Vlad the Impalaer or Vlad Tepes in romanian). Vlad build the Old Court in Bucharest in 1459 and Mircea Ciobanul built the adjacent church in 1559. Bucharest became the official capital of Muntenia  in 1698 under the ruling of Constantin Brancoveanu. Brancoveanu played an important role in the architecture of Bucharest, there is an architectural style named after him, the Brancovan style. Several churches and palaces build around this time are still standing, like the Cretulescu Church and Stavropoleos Church located both downtown Bucharest, and Mogosoaia Palace located outside of the city.  Unfortunately, one of the most important monuments in Bucharest built in the Brancovan style, Monastery of Vacaresti (1717 - 1736), was demolished from the order of Ceausescu. During Ceausescu's regime, pieces of the city were tore down to make room for impersonal apartment buildings or mega constructions fit for the ego of a dictator rather than the needs of the people. The little silver lining was that about 18 of these beautiful historical churches were saved by an engineer and his method of moving them away in their entirety by rolling them on metal rails.  (Note: The masterpiece of the Brancovan style is the Monastery of Horezu, three hours by car from Bucharest, also placed on the UNESCO World Heritage list.)

Much of the current downtown and beautiful public buildings were build at the end of the 19th century and beginning of the 20th, when Romania became a monarchy. Many of these were palaces that nowadays host museums like Cantacuzio - currently Enescu Museum, Sutu - currently museum of Bucharest, or Royal Palace - currently the National Museum of Art. Others, were created  for public service such as the CEC Palace, the Central University Library or the Athenem (Ateneul Roman) probably the most recognizable building in Bucharest and Romania because of its unique architecture. The best part of Bucharest are the parks, the most well-known are Cismigiu Gardens and Herastrau Park -- recently renamed Mihai I in the honor of the last king of Romania.

It is impossible to talk about Bucharest's architecture and not to talk about the buildings that are not there anymore. One of those is the first National Theatre badly damaged during the bombardments of the second world war. Besides all the destruction made by wars, and the demolition that took place during Ceausescu's regime, one of the most damaging events was the big earthquake from 1977 when many of the taller buildings built between the two world wars were destroyed. The most recent damages were created by the uprising in 1989, and while some of the important buildings were fixed, including the Royal Palace,  there are still bullet holes in the apartment buildings in the neighborhood I grew up in.


Hometowns, like family, are the first to shape what we think the world is and how we relate to it. Mine was an imperfect bubble with access to excellent education and culture, but where life was still raw and one had to use their elbows to get on a bus. Thrown at the edge of the European map, ``the little Paris'', forced into modernity by kings,  scarred  by wars, earthquakes, dictators, and uprisings,  managed to preserve oases of beauty.  Today, the childhood wheat fields are long gone, replaced by new neighborhoods with modern apartment buildings and grocery stores that seem to get bigger every time I visit.  In days where I feel lost, like ancient navigators looking up in the sky to orient themselves, I find my direction from knowing that in the middle of Bucharest, Romania, by the Herastrau Lake, at the Village Museum, there is a house that looks just like the one my grandparents built.